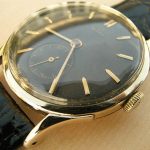 The Movement is a Corner Cut Rectangular Calibre 17.8

33mm Diameter Dial not including the Original Omega Crown

All in Excellent – next to Mint condition

This watch has just been serviced and is Guaranteed for 3 months.

This 1943 14K gold Omega is in superb condition. The watch is original in every way, this includes the dial, the hands, the crown, case and movement. In addition this is a very special watch for the following reasons:-

The asking price is far below market value. One could easily spend considerably in excess of this for a more conventional vintage gold Omega watch from the same period with a circular movement. With its beautiful Antoine Gerlache case, chocolate dial and rectangular movement, this model is far more unusual and certainly likely to be a much stronger investment.