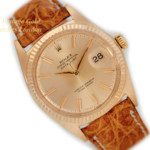 A Beautifully Well Cared For And Lightly Used Example

Founded in 1905 in England by Hans Wilsdorf and Alfred Davis as Wilsdorf & Davis, the company became known as the Rolex Watch Company in 1915, moving to its new Geneva headquarters in 1919. The success of the wristwatch can be largely attributed to many of Rolex’s innovations which made the company one of the most respected and well-known of all luxury brands. These have included its famous “Oyster” case — the world’s first water-resistant and dustproof watch case, invented in 1926 — and its “Perpetual” — the world’s first reliable, self-winding movement for the wristwatch, launched in 1933. These would form the foundation for Rolex’s Datejust and Day-Date, respectively introduced in 1945 and 1956. Also and equally importantly, Rolex is known for its sports watches, such as the Explorer, Submariner and GMT-Master launched in the mid-1950s.

During the 1930s and ’40s, Rolex also became quite masterful at courting tremendous publicity and excitement through literally being ‘on hand’ during numerous record-breaking events. These were, for example, swimming the English Channel (1927), breaking the world automobile speed record (300mph, 1935), breaking the sound barrier (1947) and climbing Everest for the first time in 1953. No matter how well orchestrated these events came to be, we have to admire Rolex for becoming masters of self-promotion and capitalising on every opportunity with simultaneous worldwide marketing campaigns.

Of course, Rolex is now so ubiquitous it is almost its own kind of its currency. A Rolex is the watch you want on your wrist when you’re in a Third World country when revolution breaks out and there’s only one seat on the plane, – and there’s a guy standing there with a machine gun! You give him a Rolex and he’ll give you the seat!