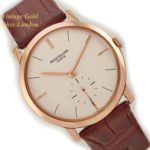 Even today, Patek Philippe’s extraordinary care and commitment towards perfection means it takes almost a year to manufacture even its simplest watch movement.

Significant moments in watchmaking since 1839 …

It is said that fewer than 1 million Patek Philippe watches have been made since the first watch was completed in 1839. That is fewer than some high-end Swiss manufacturers (notably Rolex) produce in one year. In fact, the company limits itself to producing less than 50,000 watches per year, even though it is estimated by watch market analysts, the company could sell ten times this figure. Patek production is so detailed, it takes almost a year to complete its most basic watch and more than two years to produce some of the more complicated timepieces.

We, of course, associate Patek Philippe with the very best, but more particularly, understated elegance, craftsmanship, heritage, exquisite design, perfection and total confidence and commitment in everything it does.