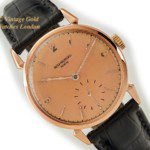 A Beautifully Well Cared For and Lightly Used Example

Patek Philippe ‘Extract from the Archives’ Included, as Shown

Even today, Patek Philippe’s extraordinary care and commitment towards perfection means it takes almost year to manufacture even its simplest watch movement.

Significant moments in watchmaking since 1839 …

It is said that fewer than 1 million Patek Philippe watches have been made since the first watch was completed in 1839. That is fewer than some high-end Swiss manufacturers (notably Rolex) produce in one year. In fact, the company limits itself to producing less than 50,000 watches per year, even though it is estimated by watch market analysts, the company could sell ten times this figure. Patek production is so detailed, it takes almost a year to complete its most basic watch and more than two years to produce some of the more complicated timepieces.

We, of course, associate Patek Philippe with the very best, but more particularly, understated elegance, craftsmanship, heritage, exquisite design, perfection and total confidence and commitment in everything it does.

The Patek Philippe Calatrava design originates in the early 1930s when wristwatches were still a relatively new phenomenon. However, these were gaining popularity following widespread use in World War I. During this period, Patek Philippe was in a precarious position due to losing direction somewhat during difficulties following the Wall Street Crash and Great Depression in America, its largest market, so badly needed a mainstream model to sell in larger numbers and generate some steady income. Inspired by the Bauhaus principle of form follows function, the minimalist design created by David Penney distilled timekeeping down to its most pure essence. The Calatrava made its debut in 1932 with the Reference 96, a small watch by today’s standards at 31mm. This was essentially the same design as you see here, and one with which we have all become familiar. You may feel it somewhat unremarkable today, but this is because the Calatrava Reference 96 is considered to be the blueprint for the ultimate modern dress watch, a design standard today.

It is also incidentally, the first Patek to introduce a numbered model reference to its catalogue as well as spawning the first collection or line of watches with a name.

Characterised by its pure lines, round case, supreme elegance and timeless understated perfection, it became the model for the gentleman’s dress watch until this very day. Reference 96 was initially launched in 1932 with a Jaeger-LeCoultre movement, because until this point Patek Phillipe had more often bought in its movements. However in 1934, the LeCoultre movement was replaced by Patek’s new in-house calibre, the 12”’120, developed under the direction of Jean Pfister, who was in charge of the technical department where these were created. He was tasked with making the initial drawings for the new calibres – the first of which was the 12-120.

The Model Ref. 1578 you see here carries this very same Patek Philippe Calibre 12-120 movement which is a 12 ligne movement, originating with the very first Calatrava, the Reference 96.

The reference 1578 is almost always found in yellow gold, rather than the pink gold example we see here. Experts are unable to be precise, but certainly fewer than 20%, and perhaps even as few as 1 in 10, were produced in pink gold. The few pink gold examples which do come to market would certainly seem to bear this out.

The dial has an interesting colour which looks subtly different under different lights, as we have tried to demonstrate in the photographs. This could variously be described as salmon, fawn, or camel. The dial carries a very light vertical grain and the colour changes are quite subtle, depending on how it catches the light and also if it is natural or artificial light.

The dial carries solid pink gold standard Arabic numerals, pink gold Spearhead and Stud hour indices, with pink gold Index hands and is correctly signed for the period: ‘Patek Philippe & Co Geneve’, without ‘Swiss Made” at the very bottom of the dial. As this is an early example of the Calatrava, this watch also carries a subsidiary seconds dial at ‘6’.

This dial is original, unrestored and untouched. It is also in really excellent condition considering the age of the watch, with even fading, little spotting or crazing and with an even overall patina. Due to its relatively good condition and for reasons of retaining the character and the originality of the watch, we have left it completely alone. If however, you would prefer the dial sympathetically restoring, we will be happy to arrange this for you without any extra charge.

Please note, even though our photographer has done excellent work, the dial does look much better in real life.

Some may be surprised that Patek Philippe almost did not survive the Great Depression and Wall Street crash of the early 1930s. Fortunately, the company was saved by the Swiss, Stern family, which still owns the company today. One of Charles Stern’s early important decisions as Chairman was to cease the practice of buying in movements from Jaeger-LeCoultre for its Calatrava collection, introduced earlier in 1932. This is important because the Patek Calibre 12-120 movement we see here was the direct result of this decision. Indeed, it was the first Patek Philippe movement fitted in the Calatrava, which subsequently became its most successful line of watches ever. The Calibre 12-120 is one of two versions, the 12-120 with the subsidiary seconds dial as seen here, and the 12-400 with a centre seconds design. The movement has 18 Jewels, a Breguet hairspring and a power reserve of 44 hrs.

As can be seen, this movement is in spectacular condition. The Geneva wave finishing on the bridge and plates and the bevelled edging throughout was all applied by hand, 70 years ago, and looks as beautifully bright and fresh today as one could ever wish. This movement is in A1 condition indicating this watch has been properly cared for and regularly serviced.

The movement has been fully overhauled and serviced by a Master Watchmaker. This means dismantling the movement to each of its component parts, careful inspection under high magnification, replacement where necessary with only genuine parts, then careful reassembly and adjustment, before final calibration in 5 positions. The movement winds sets and runs accurately and reliably and at final testing and calibration, it was running within +5 seconds per day, averaged over 5 positions. This is outstanding for any watch of this age. We are therefore highly confident in offering our 12-month warranty* with this watch.

As can be seen in the photographs, the Patek Philippe extract from the archives, applied for and included in the sale, indicates this watch was manufactured in 1948 and first sold on June 17th 1948.

*Please note – our 12 months’ warranty is only applicable if the full list price is paid.

Anyone with more than a passing interest in vintage Patek Philippe will know that a 1940s example, particularly in pink Gold and over 33mm, is exceptionally rare. Indeed, these are seldom seen outside the high-end collector/auction market.

The case is of a three-piece ribbed design with the bezel and case-back slightly overlapping the rounded main case. Patek showed a slight lack of restraint with the Reference 1578 as the lugs have a touch of Spider design. This is more noticeable from above the watch. However, these add flair to the design and complete the case very elegantly.

The case is also notable for the impressive pinkness of its gold. 18ct pink gold is an alloy comprising of 75% pure gold, mixed with mainly silver and copper. Depending on the precise mix of silver and copper and other trace metals, pink gold can range anywhere between a coppery red, through pink, to almost yellow gold. Quite how Patek achieved this level of pinkness here will perhaps remain a secret.

At 35mm in diameter, excluding the crown, this is a remarkably large watch for the period and certainly for a Patek Philippe dress watch. In fact, only its chronographs were larger.

The condition of the three-piece case is outstanding, indicating the watch has seen only very light use and proper care. It is as sturdy and tight as the day it was made, with all parts pressing together with a very firm click. There are no scratches, other marks, or signs of wear visible to the naked eye.

Inside the case, the case-back all is signed correctly and as expected: ‘Patek Philippe & Co.’, ‘Geneve’, ‘Swiss’, with Swiss 18ct hallmarks, the case serial number 646742 and the Patek Philippe Model Reference number 1578.

The Strap and Buckle

The Box and Papers

As shown, an original Patek Philippe ‘Extract from the Archives’ is included with the watch showing all the reference numbers, markings, signatures and hallmarks are all correct, and dating its manufacture and sale to 1948.

Our detailed Particulars document will be included with the receipt, along with our 12 months’ warranty*. A separate insurance valuation for the replacement value of this watch will also be provided at the time of sale, along with our unique ‘Lifetime Authenticity Guarantee, which states: “If this watch proves to be anything less than totally authentic, or not as described, Vintage Gold Watches of London will offer you a full refund at any time”.

This watch comes complete with a high-quality hardwood presentation box as shown.

Here we have a truly rare and highly sought after, vintage gold dress watch from horology’s most revered name which is truly a thing of beauty – to wear, use, treasure and enjoy. It will also make an excellent investment and family heirloom piece. Even though Patek prices continue to rise inexorably, we feel outstanding examples such as this remain undervalued, particularly when compared to a new Patek Philippe. As each year goes by and the world market for vintage Patek Philippe watches expands, availability will become ever more limited, meaning prices are destined only to climb ever higher!

A word about our prices – We always try our hardest to acquire the very highest quality watches we can find, before restoring these to the highest possible standards. We then offer these at the fairest prices we can, taking into account our pre and post-sales care and service. This approach inevitably means we will never be the cheapest, but nor will we be the most expensive. Indeed there are many well-known stores in West London which are very successful charging between two to three times our prices. We therefore consider our prices to be very fair, given the quality of watches we have to offer.

Please note, we also welcome part exchanges and offers of watches for sale.