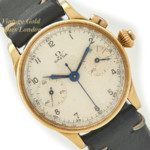 Movement, Dial and Case in Wonderful Condition Throughout

Since the company was founded in 1848, Omega has pioneered a huge range of innovations. Britain’s Royal Flying Corps chose Omega watches in 1917 as official timekeepers for its pilots and again in 1940, RAF Pilots watches were supplied by Omega. The 1940s also saw the first tourbillon wristwatch and the first of the famous Seamaster watches, whilst the 1950s and ’60s introduced the legendary Constellation, Speedmaster, Seamaster 300 and Railmaster. Over the years, everyone from John F. Kennedy to Elvis wore Omega watches on official duties. What’s more, in 1962, astronaut Wally Schirra took his Omega Speedmaster to space on NASA’s Mercury Sigma 7 mission, and in 1969 two Speedmasters landed on the moon, worn by Neil Armstrong and Buzz Aldrin.

Why This Watch Is Important

Omega was an early pioneer of the wrist chronograph, releasing its first model, the 18′ CHRO, in 1913 making this one of the very first wrist worn chronographs produced. These were sold as military watches with some of the first going to Britain’s Royal Flying Corps and used by some of the most famous wartime pilots and military personnel. Omega recently reissued a heritage edition of this chronograph which has generated considerable interest in all of its original early chronograph models.

In 1930, Omega and Tissot merged, with the aim of marketing high-quality Swiss watches. Omega would maintain its position in the medium-high luxury segment and Tissot would target the medium market. Subsequently, in 1932 the company bought Lemania, a Swiss company specialising in the manufacture of high-quality chronograph movements, founded in 1884.

The Calibre 33.3 movement found here has its roots in the calibre 28.9 movement, designated 13CH by its manufacturer Lemania. It is a column wheel movement, which was highly advanced for the period and highly accurate and reliable. Later evolutions of this movement included the 33.3 CHRO T1, T2 – T6, becoming the Omega 170 in 1949, and the Omega 171. Such was the complexity and expense of this movement that only 13,700 were produced from 1933 to 1952.

In 1942 the movement was further improved to offer anti-shock and anti-magnetic properties. A new version for water-resistant chronographs spun off in 1949 before the end of production of the movement in 1952. In parallel, in 1949, after a number of modifications to these predecessor movements, the Lemania Cal.27 was born. This calibre is known under a far more famous name: The Omega Cal.321. This is the iconic calibre which was used in the first 11 years of Speedmaster production and was also the calibre found in the Moonwatches that were used for the Apollo moonwalks. Many consider the Cal.321 to be one of the best chronograph movements ever produced.

Such is the high regard for the Cal.321, Omega recently began to manufacture this movement once again to fit in its heritage edition Speedmasters.

The original unrestored twin register silver-white dial has a very slight vertical grain, which helps catch the light and improve readability in low light. The 1 – 12 standard Arabic numerals are painted in black, along with the Omega brand and signature.

Once the chronograph function has been started and the central seconds hand is running, the right hand register counts elapsed time in minutes. The interesting feature here is that the right hand minute counter moves instantly with the elapse of each minute. That is, it will only move as the central seconds hand completes each minute. This is highly advanced for the period as even today, not all chronographs have this feature. The left hand register is a continuously running seconds hand which runs independently of the chronograph function.

The seconds register is divided into fifths of a second. Around the very outer edge, there is a Tachymetre scale used by the military for determining the position of heavy artillery emplacements based on the time difference between the flash and sound of the distant gun as it is fired.

The original, restored blued steel Plume hands are present, along with the matching seconds hand, each of which are in superb condition.

Despite its military purpose, the dial has an unmistakable simplicity and charm, often found in these early wrist chronographs.

This is the original dial which is unrestored and untouched. It has a very even patina and is remarkably clean given it is over 80 years old. Only under very close examination, such as the high magnification of the macro lens these photographs have been taken with, can some speckling, very small scratches, and other marks be found. This dial is therefore in outstanding condition for its age and so for reasons of originality, we have left the dial completely alone rather than restore it. If however, upon purchase, your preference is to have the dial restored to its original condition, we will be happy to do this for you free of charge.

For the reasons stated at the beginning and end of this page, this is a very important movement.  As can be seen, just like the rest of this watch, it is in amazingly clean condition considering its age. Generally, a watch movement this old will show signs of tarnishing on some of its surfaces caused by moisture, but this movement has been kept in tip-top condition through regular servicing and proper care and attention. Again in line with the condition of the rest of the watch, the movement indicates this watch has been treated with all the proper care it deserves.

The original Omega signed Calibre 33.3, 17 Jewel movement has been given a thorough overhaul and service by our vintage chronograph specialist watchmaker. This means the movement has been completely disassembled, cleaned, inspected and rebuilt using only the correct original parts where required before careful calibration and testing. Upon completion, the watch is now running to within +9 seconds per day! This is truly outstanding for any vintage watch, let alone one of this age! When fully wound, this movement has a 36-hour power reserve. We therefore have no hesitations in offering this watch with our 12 months’ warranty*

With proper care and attention, this watch will provide many more decades of faithful service. Indeed, a good watchmaker will be able to keep this watch working properly, almost indefinitely.

*Please note – our 12 months’ warranty is only applicable if the full list price is paid.

Gold Omega chronographs from this period are rare, as most were made of steel or steel and gold. At just a shade over 36mm in diameter, excluding the crown and 13mm in depth, this watch has a sizeable presence on the wrist, even by today’s standards.

The case is of a heavy, sturdy three-piece design with pleasing swept back lugs. Overall it is a nice looking solid design without looking too chunky or over-engineered. The flat, round-edged case-back is of full thickness and has never been engraved. It is also tight fitting and presses back with a solid and reassuring ‘pop’. Inside the case-back all is correct and as expected. The case-back carries the Omega brand and signature, Geneva Swiss 18ct hallmarks and the serial number 9173699.

The most remarkable aspect of this case, apart from its rarity, is its condition. It is simply superb. From each and every viewpoint it is very difficult to fault, with no signs of scratches, dings or damage visible to the naked eye. After cleaning and careful inspection for integrity and then some very gentle hand-polishing, the case was very quickly brought back to the condition you see here.

Please note – our standard advice applies: Vintage Watches should be kept clean and dry at all times.

The Strap and Buckle

The watch is fitted with a simple horsehide brown leather strap which is of a similar style type originally worn on this watch. However, if a different colour or style of strap is preferred, please let us know and we will do our best to oblige, free of charge. We carry tan, conker, dark brown burgundy and black straps in stock, in plain, padded leather, alligator, crocodile or lizard skin.

The Box and Papers

Although there are no original papers with this watch, the reference numbers, markings, signatures and hallmarks are all correct, dating the watch to circa 1936.

Our detailed Particulars document will be included in the sale, with our detailed receipt and our 12 months’ warranty*. A separate insurance valuation for the replacement value of this watch will also be provided at the time of sale along with our unique ‘Lifetime Authenticity Guarantee’ and certificate which states: “If this watch proves to be anything less than totally authentic, or not as described, Vintage Gold Watches of London will offer you a full refund at any time”.

The watch also comes complete with a vintage Omega presentation box, as shown.

The connection to one of the most famous chronograph calibres of all time certainly makes the cal. 33,3 interesting from a collecting standpoint. Another reason is the relative scarcity of the movement: In the roughly 20-year production run of the cal.33,3, only 13,700 are believed to have been produced. Lastly, the Cal.33.3 is a large movement. It can trace its lineage directly to its pocket-watch predecessors of the past and at 37.5mm, these watches dwarfed other contemporary chronographs which generally measured 34-35mm. To this day, due to their complicated dials in conjunction with their size, Cal.33.3 watches have a remarkable wrist presence.

This is a highly collectable vintage gold watch from one of horology’s most famous names which will provide an excellent financial investment as well as be something to treasure and enjoy!

A word on our prices – We always try our hardest to acquire the very highest quality watches we can find, before then restoring them to the highest possible standards. We then offer these at the fairest prices we can, taking into account our pre and post-sales care and service. This approach means we will never be the cheapest, but nor will we be the most expensive. Indeed there are some well-known stores in West London which are highly successful charging between two to three times the price you see here. We therefore consider our prices to be fair, given the quality of watches we have to offer.

We are happy to accept PayPal as this is the quickest method of payment. However, if you would like to pay by UK cheque or by bank transfer we will be pleased to assist you with this and pass on a 3% saving to you.

Please take a look at our other vintage gold watches.