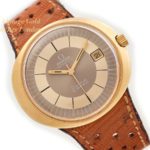 Since the company was founded in 1848, Omega has pioneered a huge range of technical innovations in watchmaking. Britain’s Royal Flying Corps chose Omega watches in 1917 as official timekeepers for its pilots and again in 1940, RAF Pilots watches were supplied by Omega. The 1940s also saw the first tourbillon wristwatch and the first of the famous Seamaster watches, whilst the 1950s and ’60s introduced the legendary Constellation, Speedmaster, Seamaster 300 and Railmaster. Over these years, everyone from John F. Kennedy to Elvis wore Omega watches on official duties. What’s more, in 1962, astronaut Wally Schirra took his Omega Speedmaster into space on NASA’s Mercury Sigma 7 mission and in 1969 two Omega Speedmasters were the first watches to arrive on the moon, worn by Neil Armstrong and Buzz Aldrin.

Why This Watch is Important

The Omega Dynamic was created for the Prix de Ville de Geneve in 1965, and first released to the public in 1967. It was conceived by Robert Foster and designed by Raymond Thevanaz.  Envisaged as a watch which could give the idea of modernity and personality to the wearer, this idea was later used by Nicolas Hayek when conceiving the Swatch.

The Dynamic is a cool watch, its distinctive design born of the free-living spirit of the late 1960s and early 70s and was all computer designed making it super modern for its time. The case has an elliptical shape which matches perfectly with the anatomy of the wrist. It also has an ergonomic dial with concentric chapter rings, a detail which makes it easier to read the hours, even with hands with contrasting colours.

To retain its sleek design, the crown was sunken into the case. In addition, the crown and the crystal were hermetically sealed so the watch could be waterproof.

However, what’s really special about the example this watch is a very rarely seen 18ct gold example. Although one or two examples have surfaced online, it’s likely fewer than 100 exist. Further, this example comes complete with its original unrestored and untouched dial. The case also looks unpolished.

For interest, a watch identical to this, although on an original 18ct bracelet is currently listed here for $13,500 USD. This listing also references a further example which sold for $19,000 USD at an Antiquorum auction in 2007.