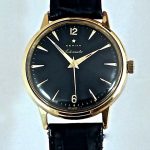 All Zenith Made Completely In-House!

Condition throughout almost as new

This substantial and beautiful black dial vintage Zenith 18 karat automatic watch was produced for the South African De Beers concern. This is a very important collectors watch on a number of counts most notably due to its extraordinary Calibre 2522P automatic movement. Zenith is well documented as being a true Swiss “manufacture” in the purest sense, producing all its own movements entirely in house from design stage to finished product. This self contained production had the practical advantage that every stage in the manufacturing process could be quality control checked by Zenith to its own exactingly high standards. It also gave the brand a very rare sense of integrity that is found in only a handful of other Swiss brands past and present considered to have attained the Swiss watch maker accolade of ‘manufacture’ status. Anyone with an interest in learning more about this can view Zenith’s website at http://www.zenithwatches.ch where a history of its ‘manufacture’ status is given.

The quality of Zenith watch movements are therefore second to none and in fact it has been something of an open secret that for decades Zenith supplied its watch movements to several of the top Swiss brands including Patek Phillipe for use in their watches.

Zenith has always preferred to keep a lower profile and invest in quality rather than self promotion. This has led to the brand becoming something a connoisseur’s or at least a discerning minority choice. At the same time their vintage watches, for a very long time have been extraordinary value for money. However prices have been on the rise in recent years as more vintage watch collectors include Zenith amongst their favourite brands.

So this is a particularly rare and important watch on account of it having one of the first rotor winding movements ever built by this top Swiss brand. But its desirability is further enhanced by its very unusual black dial and its factory produced, double signed De Beers case. For the collector, it is very important to be aware that this decoration was already on the case back when it first left the Zenith factory in 1958 and was not added independently at a later date. This makes De Beers only one of a tiny handful of non-retailer customers for whom Zenith has ever specially produced double signed watches and perhaps the only brand for which it has ever double signed cases rather than dials. The South African diamond mining giant has a long and well documented history of giving Zenith watches as retiring gifts to its senior executives and even today, there is a strong link between these two famous concerns. This particular watch was given by De Beers no less than eight years after it was produced, the 1958 manufacturing date being made clear by both the model and the serial number of the movement. De Beers would order a considerable number of identical double signed watches, occasionally as many as two or three hundred, and then having taken delivery of these would proceed to stock pile them, gradually issuing them over the following years as senior employees retired from the company. In itself, this small point is not of great importance, but it does explain what would have otherwise have been rather strange, the giving of a watch in 1966 that had clearly been manufactured in 1958.

Moving to the dial this is an exceedingly rare untouched and original black dial which is signed “Zenith Automatic, Swiss Made” and is decorated with solid gold arrowhead batons. It is in almost perfect condition, with not even the slightest fading or deterioration whatsoever. The beautiful solid gold, pitched dauphin hands are extremely wide and in proportion to the impressively large dial. These are in superb condition and completely original, though their luminosity is poor, as might be expected on any watch of this age.

Incidentally an original black dial will always add value to a watch and typically a comparable watch of a high grade maker like Zenith, will carry a 25% price premium.

And so quite a number of factors make this watch highly collectable. The double signed De Beers case and the rare original black dial add interest and value, but it is the fact that this item utilises Zenith’s calibre 2522P movement, the first ever Zenith rotor driven automatic, that makes this watch the most special. The remarkable 2522P is one of the hardest vintage Zenith calibres to find, it having been only produced in relatively small quantities between its introduction in 1958 and its discontinuation in 1964, after which it was replaced by the fast beat equipped calibre 2542PC. There is no argument today that the 2522P is one of the most beautifully built Zenith movements of the 1950s and as a consequence of its reverence, prices are strong for well preserved examples. The movement in this watch is in almost as new condition and has no discolouration or oxidisation to its surfaces, which is always the best sign that a mechanism has been well cared for. It therefore runs perfectly as it has been regularly maintained and properly serviced since new. This is a fully signed movement, with “Zenith, 28 jewels, Swiss Made” stamped into the top of the rotor, this wording then having been carefully filled in with 18 karat gold to make it more legible against its polished steel background. The serial number 5268357 is present alongside the regulator, this clearly indicating a production date of 1958, the year that the 2522P was introduced.

It is again a typically Zenith touch that all the screw heads on this movement have been hand polished to a mirror finish, except the three that hold the rotor module in place which are instantly identifiable by their blued heads. It is easy overlook the sheer craftsmanship and fine detail that went into movements of this grade. The timekeeping assembly is a perfect example of Zenith’s finest workmanship and features a Glucydur temperature compensated screw balance, Incabloc shock resistance and a running speed of 18000 half beats per hour. Very usefully, the 2522P has a running reserve of 40 hours, considerably longer than that of most automatic watches of this period. Most importantly, this beautiful movement is entirely correct. It has no changed or non-standard parts whatsoever, and is entirely as it was when new. A watch like this one, that is the very best of its type, and has been properly looked after will always be expensive when purchased, but will almost certainly prove to be far less costly, and require far less expensive repair work, in the long term.

The watch has high quality crocodile skin type strap that is perfectly suited and almost identical to the strap that would have originally been supplied with the watch when new.

Overall then, this is a very special watch priced very realistically taking account of its qualitiy and rarity. At this level it offers remarkable value for money. An automatic Rolex Oyster from the same period, perhaps a semi-bubbleback or early butterfly model, in the same 18 karat gold case, would find a new owner very quickly at more than double this sum, yet it will not be in any way superior in either build quality or design. Vintage Zenith watches are, quite literally, as good as it gets and the buyer of this piece can take great pleasure in knowing that his watch is the equal of anything by any of the other top level Swiss brands.